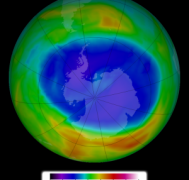 A Matter of Time for Arctic Sea Ice

New research from MIT and University of Washington scientists, suggests ozone, or rather a lack of it, may help explain why sea ice is shrinking in the northern hemisphere and growing in the southern hemisphere.

For the last 30 years or so, scientists have observed Antarctic sea ice steadily growing in the face of rising global average temperatures. While models suggest that the Arctic could face an ice-less summer as the century progresses, Antarctica set a record high sea ice extent in May, according to data from the U.S. National Snow and Ice Data Center. There are many ideas as to why sea ice is shrinking in the northern hemisphere and growing in the southern hemisphere, but a prominent theory points to ozone—or lack thereof. Now, new research from MIT and University of Washington scientists provides a better understanding of ozone’s role and why sea ice continues to grow in a warming world. The study was published in the Journal of Climate.

Depletion of the ozone layer in the stratosphere above Antarctica, which reached its peak at the turn of the century, combined with increased concentrations of greenhouse gases, amplify temperature and atmospheric pressure differences between Antarctica and the tropics. As a result, the westerly winds that blow over the Southern Ocean become stronger and cool the sea surface, enhancing ice growth around Antarctica and increasing sea ice extent.

Although observational data supports this idea, some model simulations beg to differ. Various model studies investigating the impact of ozone depletion on Earth’s oceans found that when ozone was reduced or removed, wind strength increased as expected. But instead of cooling sea surface temperatures (SST), the winds drove a warming trend by inducing an upwelling of warm water from below. “That’s where ideas clash,” said lead author David Ferreira, a lecturer at the University of Reading and former MIT researcher. “There was a lot of confusion because ozone was not explaining the sea ice expansion.” Ferreira’s co-authors include MIT Oceanographer John Marshall, MIT Atmospheric Chemist Susan Solomon, MIT Meteorologist Alan Plumb, and University of Washington Atmospheric Chemist Cecilia Bitz.

Using MIT’s Global Circulation Model (MITgcm), the researchers looked at ocean-atmosphere-sea ice simulations over various time periods ranging from years to decades. They found that while SSTs cool and sea ice expands under ozone forcing in the short-term—in the first decade or so — ultimately the oceans warm and sea ice declines. The models showed that although ozone depletion induces strong winds that enhance sea surface currents and sea ice formation initially, over time those currents result in upwelling of warm water from the ocean interior layers into the surface layer. Sustained winds help mix the warm water at the surface, eventually ending the cooling trend. “Now that we can reconcile that there is cooling followed by warming, and in fact you have a sea ice expansion and then decrease, it brings back ozone into the picture,” said Ferreira. “It’s no longer as simple as we thought.”

The researchers may have resolved a key discrepancy between models and observations, but there are still questions left unanswered such as when Antarctica’s sea ice decline will begin, if at all. The models agree that the response of the ocean to ozone depletion is a complex process of cooling then warming, “but they don’t agree on when the change from cooling to warming happens, with temperature transitions ranging between 5 and 20 years” said Ferreira. “This basically means we are not able to make predictions because the whole process of making a prediction would rely on us knowing exactly what sets that timescale.”

Which is exactly what Ferreira and Marshall are trying to do. The researchers are currently working on constraining their models with real-world data to not only better understand the mechanism of this process, but also to make predictions of when we can expect Antarctica to begin warming.

This research was funded in part by NASA and the National Science Foundation FESD project.