Alumni took a big drink from the firehose on Saturday, June 7th, 2014 at the annual Tech Day program in Kresge Auditorium. This year's theme: The Future of Planet Earth.

Through almost five billion years of evolution, planet Earth has withstood extremes of temperature, climate change, impacts with other bodies in space, magnetic field reversals, extinctions of life on a massive scale, and much more. Yet through it all, the planet stabilized enough to allow the formation of life sustaining systems that we are familiar with today.

Tech Day 2014 explored what we know about the emergence of life, the Earth, its systems, and the stresses that are inherent as well as imposed by human activity. The questions this program investigated are: How does what we have learned about the past help us to predict where we are going and how to lay the groundwork for a sustainable future?

Rafael Reif has served as the 17th President of MIT since July 2012. As president, he launched the MIT Innovation Initiative and a new environment initiative to drive progress towards solutions around environment, climate, and constructing a sustainable human society. In his previous role as MIT’s provost, Dr. Reif helped create and implement the strategy that allowed MIT to weather the global financial crisis and spearheaded the development of the Institute’s online learning initiatives, MITx and edX. A member of the MIT faculty since 1980, Dr. Reif has served as director of MIT’s Microsystems Technology Laboratories and as department head of Electrical Engineering and Computer Science. He earned the degree of Ingeniero Eléctrico from Universidad de Carabobo, Valencia, Venezuela, and his doctorate in electrical engineering from Stanford University.

For the past half century, scientists have been at work on amassing an impressive array of data and models to help us understand the stresses placed on the planet by an accelerated rate of climate change. This talk will assess the current understanding of the major climate processes and propose new directions for climate research.

Lessons from the Landscapes of Earth and Other Planets
Taylor Perron, Cecil and Ida Green Assistant Professor of Geology, EAPS

Landscapes are open archives of planetary history. Looking elsewhere in the Solar system, and into Earth’s past, shows us that some landscape features are surprisingly robust. But the specific forms they take on appear to depend on life, and more recently, on human impacts. This talk will explore clues left in planetary landscapes and the light they shed on the state of planet Earth.

As the physical planet evolved, the phenomenon of life paralleled this development. Unlocking the traces left by early forms of microbial life offers insights into the story of life on Earth, the ways in which it has met overwhelming challenges, and clues towards sustaining the world that we are a part of.

Human life has been so remarkably successful that its sustainability has become the major challenge of our age. Meeting energy needs in a sustainable fashion will require not only bringing together investors, corporations, scientists, and policy makers but new ways of thinking. Can economics be the catalyst in this?

With increasing populations, development, and climatic instability have come increased stress on the supply of potable water and significant environmental consequences. While our renewable fresh water, from precipitation, can’t be increased, it is possible to tap the vast reserves of the oceans. The costs and energy requirements of desalination have fallen steadily in recent years, and progress continues to be made.

Life is part of the natural state of planet Earth, but is it part of the natural state of the universe? As we find ways of meeting the challenges to life on Earth, new tools are being developed to peer even deeper into space in the search for other forms of life. What lessons can we use here on Earth from what we have learned about the ability of life to thrive in hostile environments? Can they help us solve some of the major issues we face today? 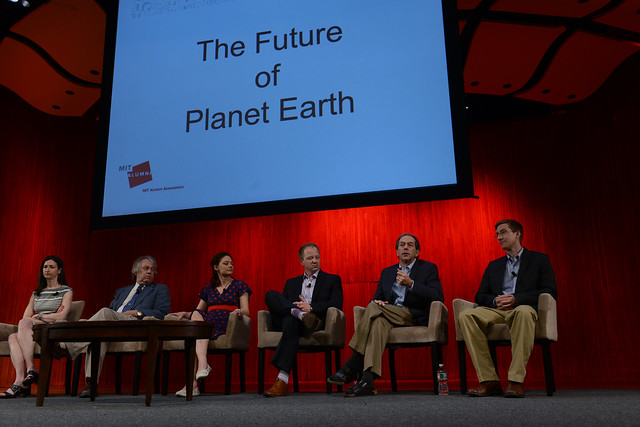