"I call it ‘the awakening.’ The whole world is waking up to the fact that we’re getting close to finding other Earths and signs of life," says Sara Seager, an MIT astrophysicist who is working to find life on planets outside our solar system. "It will change the way we see our place in the universe."

Every star in the sky is a sun. “And if our sun has planets, we expect that other stars will have planets too, and they do,” explains Seager, the Class of 1941 Professor of Physics and Planetary Science and winner of a 2013 MacArthur “genius” award. In fact, such exoplanets are common. More than 2,000 have been discovered since 1995, and there are probably many more.

“Statistically we think each of the approximately 100 billion stars in the Milky Way has at least one planet,” Seager says. Of those, as many as one in five stars like the sun has a rocky, Earth-sized planet that could have the right surface temperatures for life.

Those are the exoplanets sought by Seager, who was recruited by MIT to build its exoplanet program. But it’s a challenge. “Other Earths are so small and dim compared to the star they’re right beside,” she says. Our own sun, for example, is ten billion times brighter than Earth.

Although a few Earth-sized candidates have already been found, current telescopes are not powerful enough to tell us if they harbor life. Many projects are in the works, however, to change that — and each will get us closer to that goal, Seager says.

Seager is working on three of these projects. One, dubbed ExoplanetSat, involves a space-based fleet of 50 to 100 rectangular telescopes roughly the size of a milk carton. Each ExoplanetSat project — the first could launch in a year — will be pointed at an individual star with the goal of detecting any planet that passes in front of the star during its orbit. The changes in brightness associated with such a transit can be analyzed to determine, among other things, the planet’s density. ExoplanetSat was first developed by Seager at MIT and is now a collaboration with Draper Lab and the NASA Jet Propulsion Laboratory.

The light from a transiting planet can also give insights into its atmosphere — something Seager predicted that led to the first-ever discovery of an exoplanet atmosphere. Another part of her work is searching for the atmospheric gases that could indicate life. Seager notes that although her research is focused on the detection of an Earth twin, it has other applications. “Some of the technology developed for ExoplanetSat is being adapted for long-distance laser communication and also Earth-imaging applications. Basic research inspires fundamental discoveries on which applications flourish," she says.

Seager is excited about the future. “We stand on a great threshold in the human history of space exploration,” she told Congress last December. "If life is prevalent in our neighborhood of the galaxy, it is within our resources and technological reach to be the first generation in human history to finally cross this threshold, and to learn if there is life of any kind beyond Earth.” 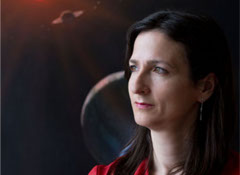 Sara Seager's research focuses on computer models of exoplanet atmospheres, interiors, and biosignatures. Her favorite projects involve the search for planets like Earth with signs of life on them.

Exoplanets and the Search for Earth 2.0 EAPSpeaks

Is There Life Out There? from Tech Day 2014
Life is part of the natural state of planet Earth, but is it part of the natural state of the universe? As we find ways of meeting the challenges to life on Earth, new tools are being developed to peer even deeper into space in the search for other forms of life. What lessons can we use here on Earth from what we have learned about the ability of life to thrive in hostile environments? Can they help us solve some of the major issues we face today?