Letter from the Head of Department - Fall 2013

The academic year is now in full swing with the American Geophysical Union (AGU) Fall Meeting and the holidays almost upon us. It has been a busy semester with some spectacular highs and lows.

We were thrilled to learn that Professor Sara Seager had been awarded a 2013 MacArthur Fellowship or “genius grant” acknowledging her pathbreaking work as an astrophysicist and planetary scientist in the quest for "Earth 2.0". Seager, who is co-lead of MIT's NASA selected Transiting Exoplanet Survey Satellite (TESS) project, was recognized as “a visionary scientist contributing importantly in every aspect of her field.” Kudos to Sara for this amazing achievement.

At the same time, we were deeply saddened by the loss of Professor Ted Madden, who spent much of his life at MIT, first as a student and then as a professor of geophysics. Ted, who was known for his phenomenal intellectual breadth, competitive spirit, and love of sports, will be deeply missed. There will be a memorial for Ted at MIT on the afternoon of Friday, March 14, 2014; more details will be forthcoming.

Also inside this issue of EAPSpeaks, you will find the multi-media story "Earth: Inside-Out "about how EAPS geophysicists like myself use seismology to understand the inner Earth, a new interactive fieldwork map, profiles of new faculty Hilke Schlichting, Germán Prieto, and Mick Follows, and the inauguration of the new Earth Resources Laboratory, which honored its founder Nafi Toksoz.

The response to our experiments with social media (Facebook and Twitter) and positive feedback for EAPSpeaks spurred us to develop an annual print compendium, which you should have received last month. Please write us at eapsnewsletter [at] mit [dot] edu if you did not receive a copy or just want to let us know what you think. We love to hear from our alumni and friends.

I hope to catch up with you at the EAPS reception during the AGU on Monday, December 9, 6:00-9:00 p.m., at the San Francisco Marriott Marquis. 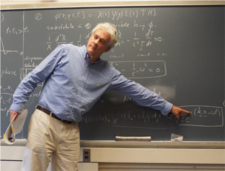 Rob van der Hilst received his PhD in Geophysics from Utrecht University in 1990. After postdoctoral research at the University of Leeds (1990-1992) and the Australian National University (1992-1995) he joined the faculty of MIT’s Department of Earth, Atmospheric, and Planetary Sciences (EAPS) in 1996. From 2004 to 2012 he was the Director of the Earth Resources Laboratory (ERL) and since the beginning of 2012 he has been Head of EAPS. In addition to his work at MIT, Rob has been a Visiting Professor at the Institut de Physique de Globe de Paris (France).

Rob's cross-disciplinary and collaborative research focuses on understanding geological processes in Earth's deep interior, both on a regional scale – for instance, continental structure and evolution of Tibet, East Asia, and North America, the subduction of oceanic plates beneath western Pacific island arcs, the upper mantle transition zone beneath Hawaii, and the complex region just above the core mantle boundary beneath Asia and Central America – and the global scale, unraveling, for instance, the pattern and nature of mantle convection. The main tools he uses (and develops) are global reflection seismology and seismic tomography, but he integrates these findings with constraints from geology, (geomagnetic) plate reconstructions, mineral physics, and geodynamics.