On September 21st and 22nd Sam Bowring, Tim Grove, and Mike Eddy with the help of David McGee and Tom Herring led the annual EAPS Department field trip to examine the geology of central Massachusetts. As always, the trip was open to all members of the MIT community as well as friends of the EAPS Department. Several children joined their parents on the trip this year, and we were lucky to have them along, as their excitement was infectious.

The trip was focused on understanding the different time scales that geologists must confront. We started in middle crustal exposures along Route 2 where we saw gneissic and schistose rocks that had been highly deformed and intruded by granite pegmatites approximately 450 million years ago. These rocks were cut by a spectacular normal fault with exposures of a well-developed silicified breccia. The age of the fault is assumed to be coincident with extension to the west ~200 million years ago. The top of the outcrop was glacially polished during the last Ice Age and covered in post-glacial soil. We moved on to climb up an outcrop just north of the Northfield reservoir to see a highly deformed and spectacularly lineated phase of the Silurian Clough quartzite. While on the outcrop, we had excellent views of Mount Monadnock in the distance and during our short hike back to the vans we saw aluminous schists with porphyroblasts of garnet and staurolite. 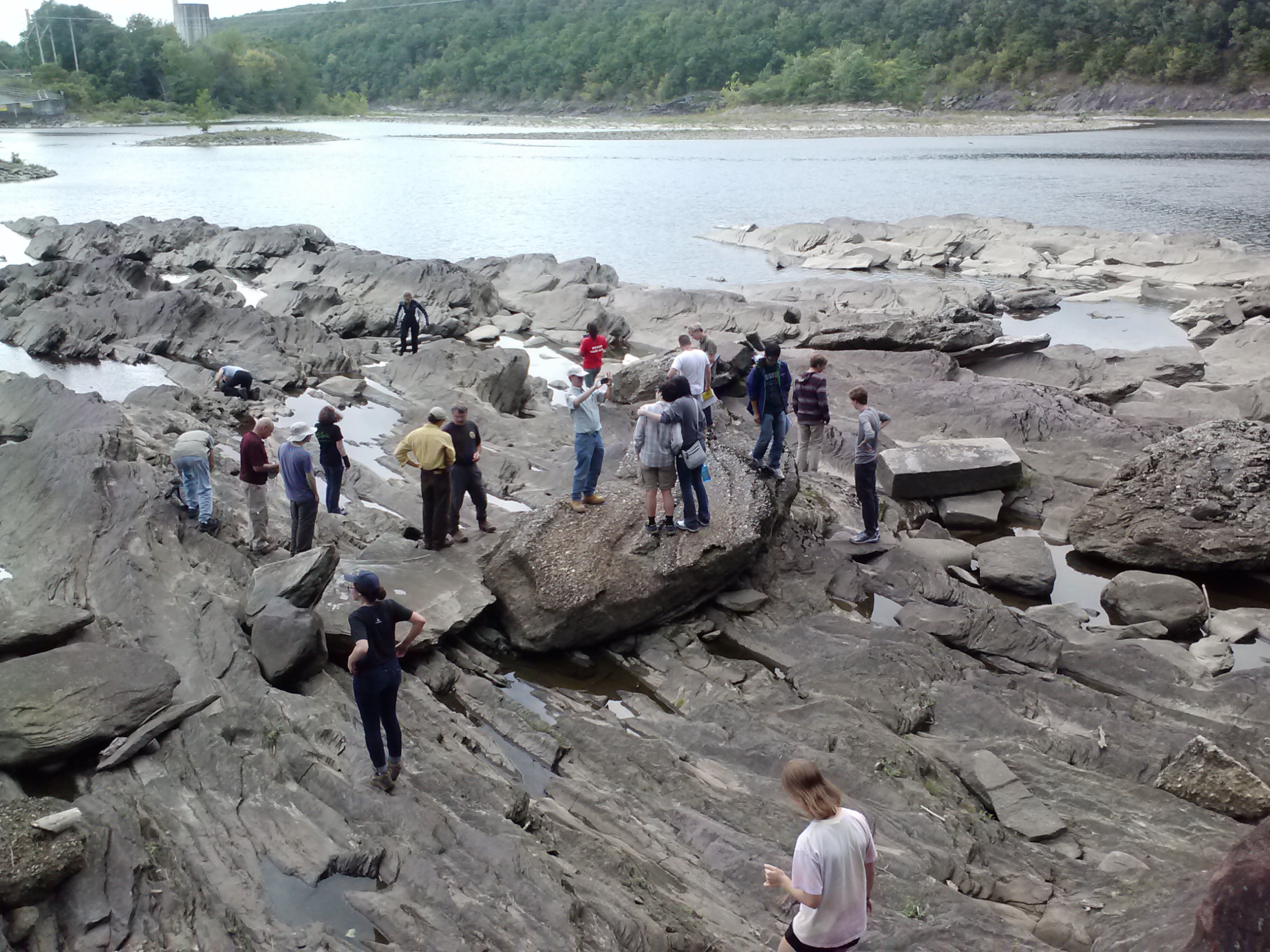 To finish the morning, we had lunch at the French King Bridge and observed the fault boundary between the Paleozoic metamorphic rocks to the east and the red sand and siltstones of the Triassic/Jurassic rift basin to the west. From our lunch stop, we continued to Turner’s Falls where we hiked down to the river below the dam to examine the cyclical lacustrine deposits, some of which include fish fossils. Unfortunately, despite our best efforts no one found any fossils this year. While on the outcrop, we discussed the Central Atlantic Magmatic Province and the mass extinction that is coincident with its earliest stages. Then it was off to see ~200 million year old dinosaur footprints along the Connecticut River near Holyoke MA where small carnivorous dinosaurs left abundant footprints in muddy and sandy sediments that were then buried and preserved. This stop is always a favorite as it is a truly special experience to see dinosaur footprints in outcrop. 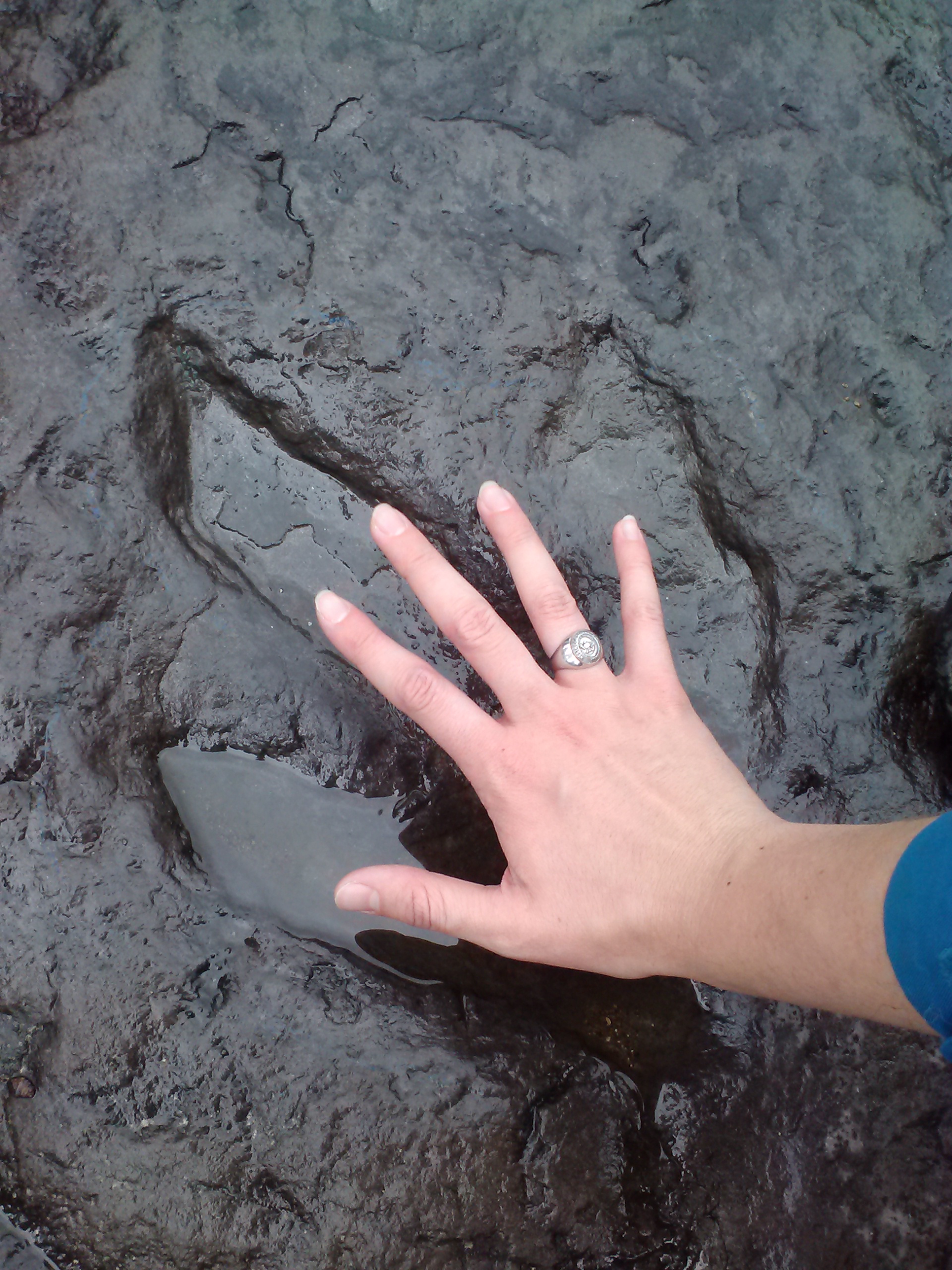 We then jumped up the geological time scale to look at sand and gravel deposits in Sunderland, MA that are associated with Glacial Lake Hitchcock (12-14 thousand years old) that formed as large deltas built with sand and gravel carried by water from the melting glaciers. We then drove north to examine a type of sedimentary deposit known as varves. Varves are deposited at the bottom of lakes with strong seasonal variations in sedimentation, meaning that their annual layers can be counted like tree rings and that they can be used for high-resolution climate reconstructions. Analysis of these varves suggests a climate signal very similar to El Nino 12,000 years ago.

Our last stop of the day was atop Mount Sugarloaf, an erosional remnant along the Connecticut River that exposes a thick sequence of arkosic sedimentary rocks associated with filling of the rift basin as well as spectacular views of the present day Connecticut River Valley.

From Mount Sugarloaf, we traveled to Barton Cove campground where we enjoyed a barbeque along the river. In the morning we visited the quarry where Edward Hitchcock recovered many of the dinosaur footprints that are currently curated at the Amherst College Beneski Museum of Natural History, which was our next stop. At the museum we were granted a private viewing of the beautifully curated dinosaur footprint collection as well as many spectacular fossil skeletons of dinosaurs and mammals.

One of our youngest enthusiasts was Judith Epstein, daughter of Ari Epstein (PhD '95), an instructor in the Terrascope program and Course 1E. She wrote the following summary of her experiences.

First of all, I would like to explain that I think the trip was: amazing, fun, educational, and overall, incredible. The places we went are: Polyphase Deformation of a “Basement” Massif: Athol fault, Crag Mountain Conglomerate, French King Bridge, Turner Falls, Dinosaur Footprint State Reservation, Long Plain delta, Glacial Varves, Mt. Sugarloaf, And the Beneski Museum of Natural History. We slept at Barton Cove.

One of my highlights is that the other people on the trip treated me like I was actually part of the group. For example, people were helping me think of ideas of how to label my rocks. They were being extra cautious of my safety, but I was fine with that. In fact I was glad. Another of my MANY highlights is that I actually got to use rock hammers! The people who were lending them to me (Luis and Darwin) taught me how to use them! You should use the flat side of the hammer to knock the rocks, and the pointed end to take the rock you chipped off away from the rest. WARNING! Always protect your eyes!

Two of my favorite things are, 1. That I got to stand in the footprint of an actual dinosaur! And it hasn’t been moved since the dinosaur stepped there! 2. When we went to the Beneski Museum of Natural History I saw a book that was made out of rocks that were split apart. When you flip the pages you see a positive fossil, and on the other side the negative fossil.

If anyone would like a copy of the field guide that we handed out to participants, please contact Sam Bowring (sbowring [at] mit [dot] edu).

Photos from this years trip via EAPS Flickr photostream

A central theme of Sam Bowring's work is using high-precision U-Pb zircon geochronology to examine rates of geological and biological processes in deep time from calibrating rates of biologic evolution to determining the age and duration of major extinction events to constraining the earliest history of the earth. Areas of particular interest include the origin and evolution of continental crust and the thermal history of orogenic belts. His work also extends to environmental applications of tracer isotopes using the isotopic composition of Pb, Sr, and U in natural waters to examine mixing and the fate and transport of contaminants.

EAPS in Brief: Geology graduate student Michael Eddy Mike Eddy is now a third year geology student working in Sam Bowring's Isotope Geochemistry and Geochronology Lab. In this video he shares the projects he has been working on, the science of dating rocks, and his experience as an EAPS graduate student.