EAPS' congratulations to Emeritus Professor John Southard who has been awarded the 2014 Twenhofel Medal for a "career of excellence in sedimentary geology", the Society of Sedimentary Geology (SEPM)'s highest honor. The medal will be presented at a reception at the Society's annual meeting scheduled for Houston, Texas, April 8th, 2014.

John B. Southard received his undergraduate degree from MIT in 1960 and his doctorate in geology from Harvard University in 1966. After a National Science Foundation postdoctoral fellowship at the California Institute of Technology, he returned to MIT to join the faculty, where he remained throughout his career and is currently Professor of Geology Emeritus.

He was awarded the MIT School of Science teaching prize in 1989 and was one of the first MacVicar Fellows, in recognition of excellence in undergraduate teaching. He has taught numerous undergraduate courses in introductory geology, sedimentary geology, field geology, and environmental Earth Science both at MIT and in Harvard's adult education program and received the 2001 Neil Miner Award from the National Association of Geoscience Teachers.

He was editor of the Journal of Sedimentary Petrology from 1992 to 1996, and is currently a contributing editor to the Journal Of Sedimentary Research. He continues to do technical editing of scientific books and papers for SEPM. 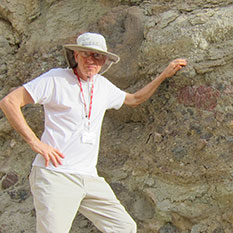