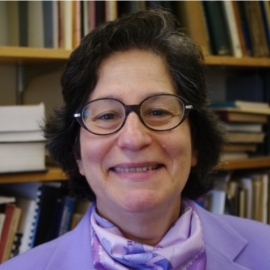 Susan Solomon is widely recognized as a leader in the field of atmospheric science. She is well known for having pioneered the theory explaining why the ozone hole occurs in Antarctica, and obtaining some of the first chemical measurements that helped to establish chlorofluorocarbons as its cause.

Solomon, who is author of several books and influential scientific papers in climate science, including Solomon et al (2009), Irreversible climate change due to carbon dioxide emissions, on the irreversibility of the climate change problem, has been honored with numerous prestigious awards, among them the 1999 National Medal of Science (the highest scientific honor in the US) and the Grande Medaille (the highest award of the French Academy of Sciences). A member of the National Academy of Sciences, the French Academy of Sciences, the Royal Society, and the Acadameia Europaea, Solomon also co-led Working Group I of the most recent report of the Intergovernmental Panel on Climate Change (IPCC), which won the 2007 Nobel Peace Prize. Time Magazine named Solomon as one of the 100 most influential people in the world in 2008.

Solomon is already building her research group in Cambridge, with soon-to-defend graduate student Diane Ivy as her first postdoc. Susan and Diane will soon begin a collaboration to extend recent work (shortly to be published in Nature Climate Change paper) exploring the impact of natural climate variability on the ability of models to provide useful predictions of climate behavior on regional or geographically specific scales: Where is climate change predictable enough for the most effective adaptation planning, and for what kind of adaptation?  Where is climate change so unpredictable, even in the face of lots of forcing, that impacts may be largely unknowable? The goal of Solomon and Ivy's new research will be to extend the original NCC study: to explore regional climate change predictabilty in Antarctica.

EAPS is also eagerly anticipating Solomon's addition to its course catalogue this fall. Environmental Science and Society will stress integration of central scientific concepts in environmental science and their connections to societal actions. Using past environmental issues (ozone depletion, global warming, acid rain, and smog) as material, Solomon will lead participants to reflect on commonalities and differences between past and present successes and impediments in dealing with environmental decisions, focusing on the science, but within the context of society as a whole.

Outside her core-scientific interests, Solomon is the author of The Coldest March, a popular book on Antarctic history which stemmed from her frequent Antarctic sojourns during the late 80's and early 90's. Her book [selected among '2001 Books of the Year' lists of The New York Times, The Economist (UK), and The Independent (UK)] was also the featured work at EAPS' inaugural Author Night held earlier this spring. Solomon gave an entertaining, informative, and well-attended presentation, followed by a book-signing and all-department reception in the Ida Green Lounge.

Solomon, who had been a scientist at NOAA since 1981, and an adjunct professor at the University of Colorado in Boulder since 1982, joined the EAPS faculty in January 2012. We are delighted she has made the decision to come East to MIT.

David McGee's general interest is paleoclimatology. More specifically, he focuses on reconstructing past changes in extratropical atmospheric circulation and hydrology. He explores this area through studies of dust blown out of the world's drylands and deposited in the ocean; changes in dryland water balance as reflected in closed-basin lakes; and studies of precipitation source and amount recorded in stalagmites. These studies involve a variety of types of data, but at the center of all of them are uranium-series isotopes, which he uses for dating in terrestrial deposits and determination of accumulation rates in marine sediments.

McGee joined the EAPS faculty in January 2012 after an extended visit last fall. Prior to coming to MIT, McGee was a NOAA-sponsored postdoc at the University of Minnesota.

Colette Heald is interested in global atmospheric composition and chemistry, and interactions of these with the biosphere and climate system: including the study of both particles and gases in the troposphere, their sources, sinks, transformations, long range transport, and environmental impacts. Using observations of the atmosphere at all scales – from ground stations, aircraft campaigns, and satellite sensors with global models of chemistry and climate – she works at the intersection of modeling and observational analysis, with a strong emphasis on the integration of the two.

Heald joined the EAPS faculty in April 2012. Prior to coming to MIT she was an assistant professor in the Atmospheric Science Department at Colorado State University.

Introducing Atmospheric Chemist Susan Solomon
In this interview, recorded in September 2011, Susan talks about her work and some of the things she is looking forward to at MIT.

Climate's Dusty Clues
Recorded in November 2011, David shares his excitement about paleoclimatology, dust, and his move to MIT.

EAPS in Brief: Colette Heald
In this video-short, Colette talks about the research questions she is working on and the techniques she uses.