Few freshmen arrive at MIT for orientation and leave campus less than twenty-four hours later but participants in DEAPS Yellowstone get to do just that.

Few freshmen arrive at MIT for orientation and leave campus less than twenty-four hours later. At 4 am on Saturday, August 18, twenty-three freshmen were waiting on Ames Street for the bus to take them to Logan Airport. They were on their way to Yellowstone National Park for a week exploring the geology and biology of Yellowstone as participants in Discover EAPS: Life in extreme environments [DEAPS: Yellowstone], a pre-orientation program organized by the Department of Earth, Atmospheric, and Planetary Sciences. DEAPS: Yellowstone and DEAPS: Extreme Weather, a second EAPS sponsored pre-orientation program, are noteable among the twenty-five pre-orientation programs because they take students off campus and into the field so they can learn about the earth sciences in the best available classroom. 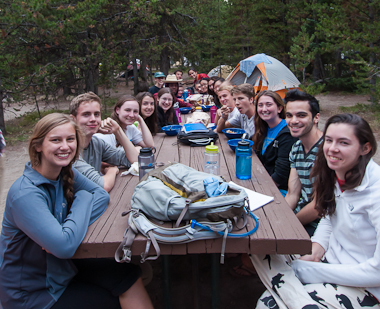 The week was a challenge for the DEAPS: Yellowstone students. The days started early and the hiking was often long. Many had never been camping; many were not accustomed to cooking. The students were divided into groups that rotated through the daily chores. Among those chores was the responsibility to present an evening report on the day’s activities and the science that was discussed. Their presentations, prepared on a laptop and projected on a sheet tacked on the side of a van, used pictures they had taken during the day to illustrate discussion points.  Each day the competitive nature of many MIT students was apparent as the presentations became more elaborate. Often the students in a group composed and presented an original song relevant to the day’s activities. The DEAPS: Yellowstone students were accompanied by Prof. Sam Bowring, two Post-doctoral researchers who are department alumni and veterans of the trip, the EAPS educaton director, volunteer graduate students, and majors.

The science on the trip had three main themes: understanding the geologic processes that formed the modern landscape, learning about the microbial life in hot springs, and gaining an appreciation of geologic time as recorded in the rocks. While the group visited many traditional spots in the park such as Old Faithful and Mammoth Hot Springs, we also hiked to and visited more remote areas in an effort to see the features of both Yellowstone’s volcanic past and its hydrothermal present. We saw 640 thousand year old flows that showed evidence of the slight differences in viscosity of the lava as it cooled, hardened, fractured, and was overridden by the continuing flow. We saw basalt that cooled rapidly forming spectacular columnar jointing and lava that cooled even more quickly to form glass.  We were fortunate to run across one of our alumni who works for the U.S.G.S. in the park conducting research.  She gave an impromptu lecture on her research that involves calculating the timescales of the most recent eruptions. 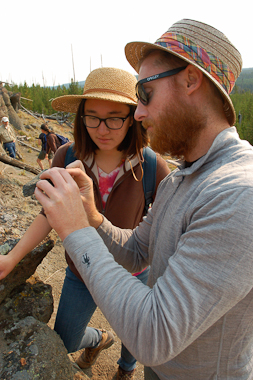 A day trip to Teton National Park displayed the results of movement on a fault that became active perhaps as long as 13 million years ago and which is still active today. The rock exposed in the mountain range shows an unconformity, or sediment deposition on an erosional surface, which resulted in an approximately 500 million year old sandstone near the top of Mt. Rendezvous resting directly on top of 2.8 billion year old gneiss. This means that more than 2 billion years of history is missing. We also saw the cirques, moraines, and kettle lakes created by the advance and retreat of the regional ice sheet in the last glaciation. Of more recent origin, we visited the 1925 Gros Ventre landslide seven miles east of Jackson Hole and, later, the 1959 Hebgen Lake landslide just beyond the western edge of Yellowstone National Park. Scarring of the mountainsides by these landslides is still easily visible today.

The hydrothermal features in the park are an area of interplay between geology and biology. The group visited a variety of geysers, hot springs, mud pots, and fumaroles, learning of the interaction between water availability, type of bedrock, and subsurface fracture geometry that led to the features at the surface. The hot springs are excellent examples of life in extreme environments. The students were able to see the variation in the distribution of microorganisms as p.H. and water temperature vary with distance from the heart of the hot spring. A day-long hike up Specimen Ridge led to a different way of experiencing the intersection of biology and geology. This area has forests of petrified trees preserved in life position. There are more than 20 forests layers buried by successive ash and debris flows 45 to 50 million years ago. These are extraordinary in both the number of trees preserved and the detail recorded. 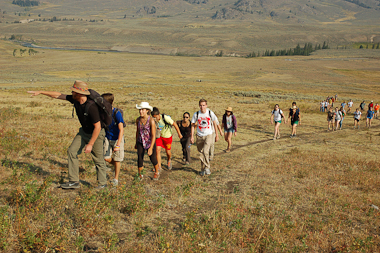 The trip was eight days, including travel, setting out  early enough for the students to arrive back on campus in time for regular orientation activities with their peers.

While most of the DEAPS students will finish their first years at MIT and move into a major in other departments, EAPS will have accomplished its goal of introducing a new generation of M.I.T. students to the extraordinary temporal and spatial complexity of the earth system. Knowledge of a system, that, as scientists and engineers in a world with challenges in the areas of energy, resources, environmental hazards, and climate change, they will be able to bring to bear as future leaders in academia, government, and industry.

Figure Legends: (Top left) At the end of a long day the freshmen relax before starting to work on cooking dinner. (Middle right) EAPS graduate student Seth Burgess explains rock composition to a DEAPS freshman. (Bottom left) The students hike on the Specimen Ridge trail. While one of the longer hikes, it was rewarding as the students were able to view layers of fossil forests. All images courtesy of Paul Richardson and Vicki McKenna.

Learn more about Professor Bowring's work in this video bio