Building a Periodic Table of the Ocean

Ed Boyle’s research group works on trace metals and trace metal isotope ratios in the oceans, estuaries, rivers, and ice cores. In this Oceans at MIT article, you can read about the team's involvement in Geotraces, a programme aimed at improving the understanding of biogeochemical cycles and large-scale distribution of trace elements and their isotopes in the ocean.

Read this story at Oceans @ MIT

Of his entire life, Ed Boyle, professor of ocean geochemistry at MIT, has spent two full years at sea. He’s traveled on enormous vessels through the North Pacific, South Pacific, South Atlantic, and North Atlantic, rarely seeing land. A research cruise involves weeks of 16-hour days spent working, eating, and sleeping with the same people. In a word, life at sea is intense. One argument is felt around the entire ship. A salty, corrosive environment swinging with heavy machinery just about guarantees things will go wrong. But no challenge detracts from the expansive views of sunsets and the unannounced visits from whales. “Those experiences are a small part of a cruise,” says Boyle. “All the rest is doing something over and over again.” That’s because the line of research in his Trace Metal Lab requires lots and lots of collecting, filtering, and measuring.

If that endeavor seems relatively straightforward, consider measuring parts per billion levels of iron in samples of seawater on board a rusty ship built from tons of it. So, to avoid contamination, anything that could contact the water samples is made of plastic. The samples are processed in “bubbles,” or super clean labs covered in plastic sheeting and pumped full of filtered air. Even the slightest exposure throws off the delicate measures, a problem that makes older trace element data prior to the mid-1970s “completely unreliable—wrong to factor of 10,” says Boyle. Over the past thirty years, cleaner collection and faster analytic techniques have allowed researchers to make progress on long open questions.

One major trace element ocean enigma is iron, which reaches the sea in dust blown off land or in emissions from hydrothermal vents. Though present in the ocean in vanishingly small amounts, iron basically controls ocean productivity. Phytoplanktons need iron to grow, and so the amount of available iron limits their growth and ability to provide ecological services. These organisms pull down CO2 from the atmosphere, playing an important role in setting the CO2 level in our atmosphere. Jessica Fitzsimmons, Ed Boyle’s graduate student, wants to understand how iron becomes available to nourish phytoplankton. But she faces a major roadblock. “We don’t even understand how iron cycles in the ocean, and we have trouble predicting where and when iron is limiting because of the extreme dearth of global data,” says Fitzsimmons. Fortunately, her advisor is leading a project to address this problem on a global scale.

Fifteen years ago, Boyle, along with Robert Anderson at Columbia University and Roger Francois, then at WHOI and now at University of British Columbia, began to discuss ways to mend the lack of a comprehensive picture of trace metal concentrations in the world ocean. It took years of planning. They had to build an international alliance and gain funding. Now, Geotraces, the largest research project on ocean chemistry, is making isolated trace metal research a thing of the past.

Over the next 10 to 12 years, hundreds of cruises will survey the ocean’s periodic table. Profiles of elements essential to ocean health, such as iron, cobalt, and molybdenum, as well as anthropogenic contaminants, such as lead or mercury, will be compiled. Boyle hopes that, eventually, data collected over the entire world ocean will comprise an unprecedented resource for understanding how concentrations fluctuate in response to climate change. “We will inspire a base from which all future studies 10, 20, 30 years from now will draw upon,” he says. Thirty countries are currently participating in the endeavor, especially the US, Britain, Germany, France, and Japan.

The measurement of a whole bunch of different elements in the same place at the same time is the signature of Geotraces. “That’s the genius of the program,” says Phoebe Lam, an associate scientist at WHOI and Geotraces research participant. “No one has ever measured all of those elements at once. So, for the first time, we can see linkages between different elements that we never knew were linked before.” This particular strength will lay the groundwork for solving the mystery of iron.

Researchers suspect that dust blowing off land provides the largest source of iron to the ocean, and they are finding that areas of high dust tend to contain higher levels of aluminum. So, the presence of aluminum in marine regions can be used as a “proxy” for iron. Boyle and Fitzsimmons hope to eventually link aluminum and iron datasets from Geotraces in order to model and quantify current iron budgets in specific ocean regions. Ultimately, these models will create the baseline needed to predict iron cycling and ocean productivity in future climates.

To ensure the success of such comprehensive datasets for iron and other trace metals, Geotraces must eventually cover the entire ocean. As a leading member of the international steering committee, Boyle is making sure that happens.

Starting in mid-October, he will travel to India, Latin America, and Russia to bring together researchers who may have an interest in participating. “There are dozens of countries that aren’t involved but should be because they are important parts of the world that we need to understand better,” says Boyle. For example, the Arctic Ocean Geotraces expedition proposed for 2015 will not be possible without Russia’s cooperation.

Boyle will end his trip in December at the American Geophysical Union Meeting in San Francisco with a talk about the kind of facilities Geotraces requires to accomplish its mission. “There is a tendency now to shrink the ships, which is bad for Geotraces,” says Boyle. “Some fields like physical oceanography can work with small fast boats, but there needs to be awareness that complex projects like Geotraces require big ships.” Even on the enormous RV Knorr, the researchers used every inch of lab space. Though 40 qualified researchers had wanted to go, only 32 could fit, and the new ship replacing the RV Knorr holds 27. 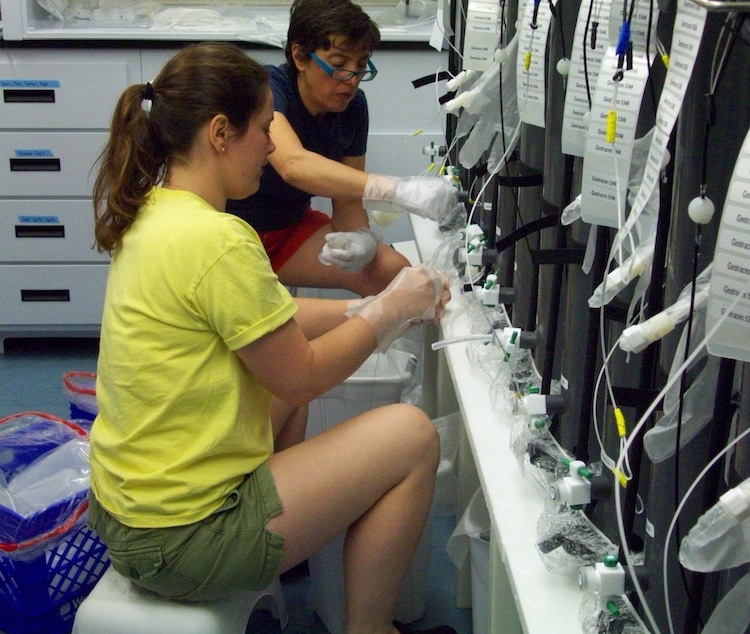 Jessica Fitzsimmons and Ana Aguilar-Islas, assistant professor at University of Alaska Fairbanks, prepare to fill bottles with seawater collected from a specific depth in the big ‘GO-FLO’ tanks. They will be measuring the dissolved iron in these samples. Credit: J. Fitzsimmons 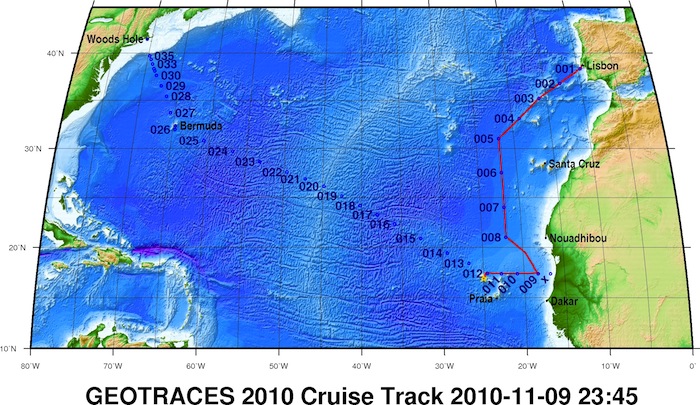 A map of the North Atlantic Transect cruise track. The red line shows the stations occupied from October 15 to November 4, 2010. The second half of the cruise stretched between the Cape Verde Islands and Woods Hole, from November 6 to December 12, 2011. Credit: WHOI 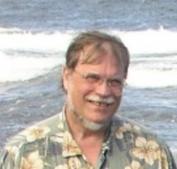 Ed Boyle studies the distribution of trace elements in the ocean. He is especially interested in the ocean’s response to anthropogenic lead emissions and the relationship between dust, iron in seawater, and marine biological activity. The Trace Metal Group Page 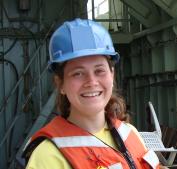 As a graduate student in Ed Boyle’s lab, Jessica Fitzsimmons studies the biogeochemistry of trace iron in the ocean. Her Phd investigates the distribution of iron in different marine environments. 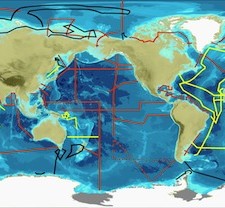 Geotraces is an international survey of marine biochemical cycles of trace elements. A large number of WHOI scientists are involved in the project.