The past five years have seen significant expansion in atmospheric chemistry in EAPS. In this article we shine a light on this growth, the people involved, and the important research that they are doing.

Atmospheric chemistry research, like most disciplines under the EAPS umbrella, can be divided into three themes: collecting observations, laboratory analysis, and modeling. Recent expansion of EAPS atmospheric chemistry faculty brings breadth and depth in all three.

Notable among EAPS fieldwork initiatives is the Advanced Global Atmospheric Gases Experiment (AGAGE). For the past three decades the AGAGE program has overseen the continuous measurement of the concentrations of the trace gases involved in the greenhouse effect and ozone depletion. Ron Prinn, who has been a faculty member in EAPS since 1971, leads this global monitoring effort. Prinn is currently involved in an array of projects in atmospheric chemistry and climate science. As co-director of the Joint Program for the Science and Policy of Global Change and director of the Center for Global Change Science, Prinn brings his atmospheric chemistry expertise to integrated assessment of science and policy regarding climate change. More

Dan Cziczo’s research (Dan joined EAPS just last year) also relies on fieldwork. Cziczo’s interest in the interrelationship of particulate matter and cloud formation, a hot topic in climate research, utilizes field studies (and also laboratory work) to elucidate how small particles interact with water vapor to form droplets and ice crystals to form clouds. For him fieldwork includes observing clouds in-situ from remote mountaintop sites or through the use of research aircraft. Last spring, he was heavily involved in the Mid-Latitude Airborne Cirrus Properties Experiment (MACPEX), a field campaign to investigate cirrus cloud properties and the processes that affect their impact on radiation. Utilizing a NASA WB-57 based in Texas, Cziczo collected hundreds of hours of flight-data over south and central North America with an emphasis over the Department of Energy’s Atmospheric Radiation Measurement site in Oklahoma. More

The kinds of observational work many of our atmospheric chemists do also tends to include a laboratory component – even if that laboratory actually ends up being out in the field somewhere. A primary example of a laboratory gone “walkabout” is Prinn Group graduate student Laura Meredith’s work at Harvard Forest in Petersham, Massachusetts. Meredith's Ph.D. research, investigating the microbiologically driven soil sink for atmospheric H2, has involved designing, building, and deploying an instrument to continuously monitor hydrogen levels at different heights above the forest floor. Using these measurements to calculate hydrogen fluxes enables her to determine the strength and seasonality of the soil sink. Back to the Forest is a video made late last year expanding on Laura’s work and providing a window on what her work entails.

Meredith, who received a graduate teaching award for her work helping to develop 12.335 Experimental Atmospheric Chemistry, is currently mentoring undergraduate senior Deepa Rao for her UROP project and senior thesis (which won this year's Christopher Goetze Prize for Undergraduate Research). Sequestering a corner of EAPS professor Tanja Bosak's geobiology lab, the pair are growing H2-oxidizing microbes imported from Harvard Forest to learn more about the basic biology driving the microbial sink for H2 in the controlled environment of the lab. More

Elsewhere on the 6th floor of MIT's Building E25, in a collaboration with Ron Prinn and others, Shuhei Ono is developing an instrument (using laser absorption spectroscopy) to take twice hourly tropospheric nitrous oxide (N2O or "NOX") concentration measurements. As both a significant greenhouse gas and a powerful contributor to the destruction of the stratospheric ozone layer, N2O is produced both naturally and anthropogenically. More

The third leg of the stool, modeling, especially using computers, provides an intellectual bridge between theoretical hypothesis and observations collected in the field and assembled, perhaps via experiment, in the laboratory.

Although Susan Solomon, who joined us in the new year (see New Faculty for more about Susan’s recent appointment) is perhaps most often visualized posing for the camera with penguins in Antarctica, these days it is modeling – integrating observations, analysing different scenarios – that has come to underpin the majority of her research. As an example, Solomon, together with her first MIT postdoc, soon-to-defend graduate student Diane Ivy, are about to begin extending earlier work (shortly to appear in Nature Climate Change) exploring the impact of natural climate variability on the ability of models to provide useful predictions of climate behavior on regional or geographically specific scales. This model-based study, exploring impacts and adaptation issues, seeks answers to questions such as "Where in the world is climate change predictable enough for the most effective adaptation planning, and for what kind of adaptation?" And "Where is climate change so unpredictable, even in the face of lots of forcing, that impacts may be largely unknowable?" Watch 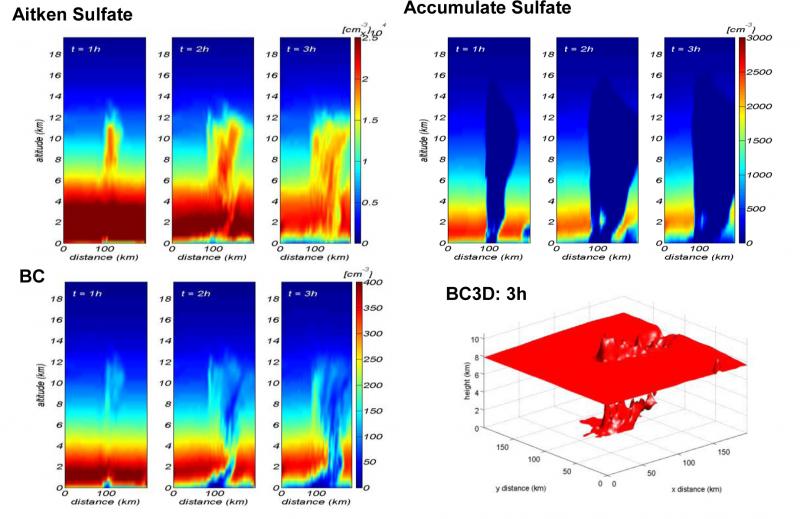 Another modeler is Senior Research Scientist Chien Wang. Chien uses models to understand feedbacks around atmospheric aerosols. Human activities have increased tropospheric aerosol abundance through emissions of particulate matter and the climate effect of these anthropogenic aerosols remains one of the most uncertain factors in current predictions of future climate. In a research effort that is specifically aimed towards achieving a better understanding of the climate response to anthropogenic absorbing aerosols (mainly black carbon aerosols) by combining model and observational data, Chien and his group are showing, for example, that absorbing aerosols can significantly affect the distribution and strength of tropical precipitation systems, including the Pacific ITCZ and the Indian monsoon. More

Leveraging the AGAGE data stream, Ron Prinn uses modeling to probe the sources, sinks, and rates of change of the greenhouse gases targeted by AGAGE. "Prepping for a Greenhouse Whodunit," an interview with former EAPS researcher Matt Rigby who left for a researcher position in the UK a few months ago, introduces how combining observations with three-dimensional models is being used to uncover the origin and characteristic behaviours of trace gas emissions to help understand atmospheric chemical processes, especially those involving the atmosphere’s oxidation capacity. Watch

Noelle Selin's research group focuses on using atmospheric chemistry and integrated modeling to inform decision-making strategies on air pollution and climate change. One of the projects she is working on is a study of the global transport and fate of air toxics (mercury and persistant organic pollutants or POPs). The dominant source of anthropogenic mercury emissions is burning of coal, but industrial processes such as smelting are another source. POPs can be intentionally produced (for use as pesticides and industrial chemicals) or emitted as byproducts of combustion or other industrial processes. Both mercury and POPs accumulate in food webs, posing risks to human health and the environment. More

Finally, EAPS newest recruit Colette Heald (New Faculty) is working at the intersection of modeling and observational analysis, with a strong emphasis on the integration of the two. Heald's research is focused on atmospheric composition and chemistry and interactions of these with the biosphere and climate system. Her work, which involves using observations of the atmosphere from all scales (from ground stations, aircraft campaigns and satellite sensors with global models of chemistry and climate) includes the study of both particles and gases in the troposphere, their sources, sinks, transformations, long range transport, and environmental impacts. More

Laura Meredith's personal reflections on the growth in atmospheric chemistry in EAPS aptly sum up the changes that have occurred over the past five years: "EAPS has been the perfect environment to nurture research passions even if they take you in a new direction that is unfamiliar to most in your group. At first, our research group, under Professor Ron Prinn, was just about the sole atmospheric chemistry presence at MIT. This still worked well for me because I was able to learn and gather resources from Professor Prinn's extensive network of collaborators and from collaborators at Harvard University. When I became more interested in studying the fundamental biology behind the H2 soil sink, the interdisciplinary nature of EAPS came through. Professors Tanja Bosak and Shuhei Ono, who primarily study geobiology, generously welcomed me into their labs and gave me invaluable advice on methods and ideas that were quite new to me. I have felt very fortunate for all the resources that I've had to facilitate my research. In the past few years, we have experienced a welcome and exciting explosion of atmospheric chemistry faculty, students, and research at MIT! Prinn group meetings used to occur every month or so and were attended by the same handful of students. Now we have pan-MIT atmospheric chemistry lunches every two weeks with much greater and diverse attendance. I have no complaints about the resources that were available to me when I first arrived, but with the arrival of Noelle Selin, Dan Cziczo, Susan Solomon as well as Professors Jessie Kroll (CEE), and Collette Heald (Joint with CEE), with all their experimental and modeling acumen, MIT is a very exciting place to be for atmospheric chemistry these days."

In the Field: A view from the cockpit during the MACPEX experiment last spring - courtesy of the flight personel

In the Lab: The heart of the instrument Laura Meredith has built and deployed in Harvard Forest - image: Helen Hill

Back to the Forest

In this video graduate student Laura Meredith shares her thesis work to build and deploy an instrument to the Harvard Forest Long Term Ecological Research site in central Massachusetts. Laura is in the Climate Physics and Chemistry Program. Her advisor is Ron Prinn.

The Brit, his Computer and Prepping for a Greenhouse Whodunnit

Matt Rigby, a fomer researcher in the Prinn Group, is interested in determining the sources and sinks of greenhouse gases. To determine their sources and sinks, Rigby uses measurements of the concentration of greenhouse gases in the atmosphere together with computer models (a lot like the models used to produce weather forecasts) to work backwards from where a gas is observed to where it must have come from. In this video he describes how doing this he can then seek to work out what the sources are or what the destruction rates for the various gases are.

Other groups mentioned in the text

Joint Program for the Science & Policy of Global Change