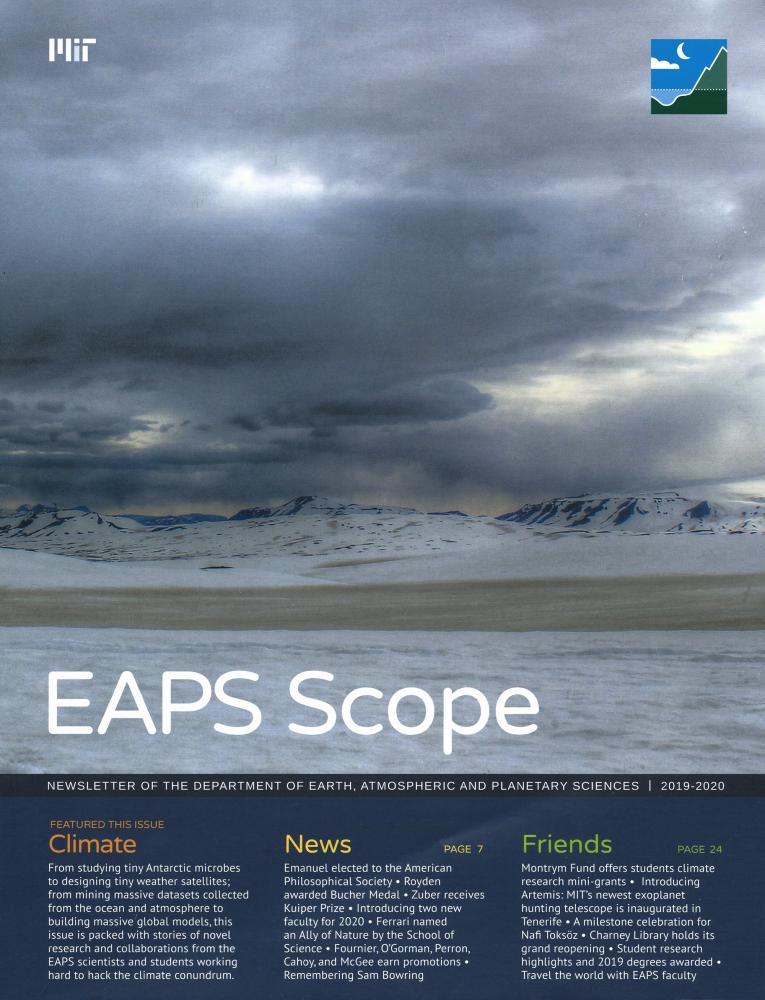 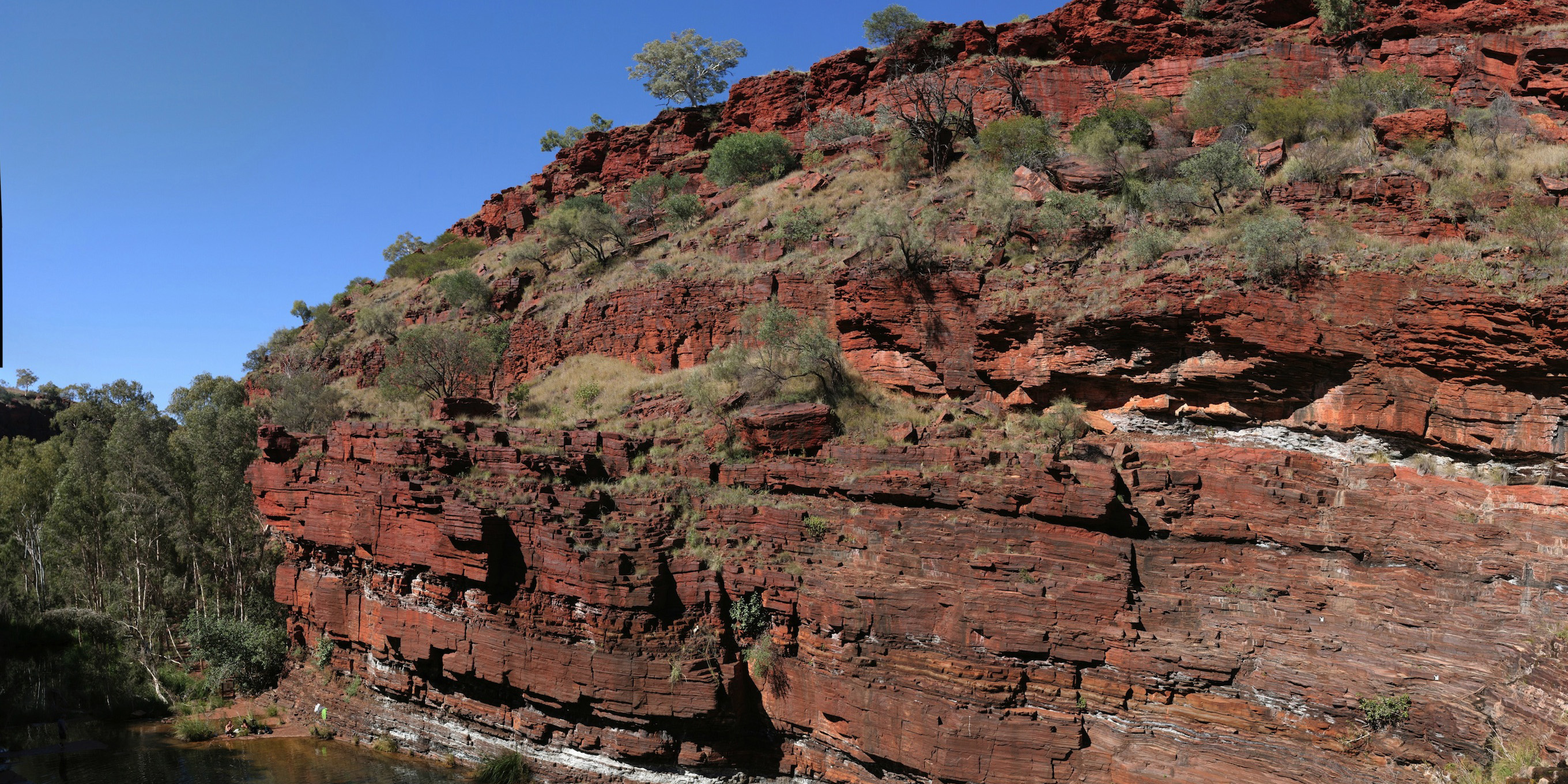 Timing the speed of life

Somewhere between 2.3 and 2.5 billion years ago, the Earth experienced a monumental atmospheric shift, setting the stage for complex life to emerge. EAPS researchers are looking for markers in the rock record providing clues as to how and why—and exactly when.

The accumulation of oxygen in the Earth's atmosphere marks the one of the most dramatic transformations the planet has ever experienced. The change, which resulted in a shift from a reducing atmosphere devoid of oxygen to an oxidizing one, fundamentally reorganized the planet's biogeochemical cycles, setting the stage for the development of complex life. But what caused the Great Oxidation Event (GOE), and when it preciseIy happened, remains one of the most interesting mysteries in the history of life on Earth.

"Why are we here?" asks Roger Summons, the Schlumberger Professor of Geobiology. "We wouldn't be here without oxygen. The whole evolution of complex life was made possible by the advent of oxygenic photosynthesis." In his research, Summons searches for biomarkers—subtle chemical signatures written into the geologic record by living organisms—that track the evolution and radiation of microbial life.

In his earlier work at MIT, Summons focused on sterols, a group of lipids that naturally occur in plants, animals, fungi, and some bacteria. Sterols reinforce cellular membranes in organisms, and are critical within the physiology of Eukarya.

"It began when we thought we had identified sterols in rocks that predated the Great Oxidation Event—and that can only happen if oxygen is available in the environment because it takes 11 moles of oxygen to make one mole of cholesterol," Summons says. "We thought that steroids were an organic tracer for the availability of oxygen. Turns out we were wrong—we were fooled by contamination—so we turned to other tools to study oxygen in the ancient atmosphere."

Those tools—sulfur isotopes, which have varying numbers of neutrons per sulfur atom—are a prime focus of Associate Professor Shuhei Ono, who studies how the sulfur biogeochemical cycle has changed over time.

"By showing what caused the Great Oxidation Event—biology or geology—then we can answer the question of how biology changes the evolution of climate at a planetary scale," Ono says. "We study this by looking at the chemical signatures recorded in rocks that were deposited during a critical period between 2.3 and 2.5 billion years ago." 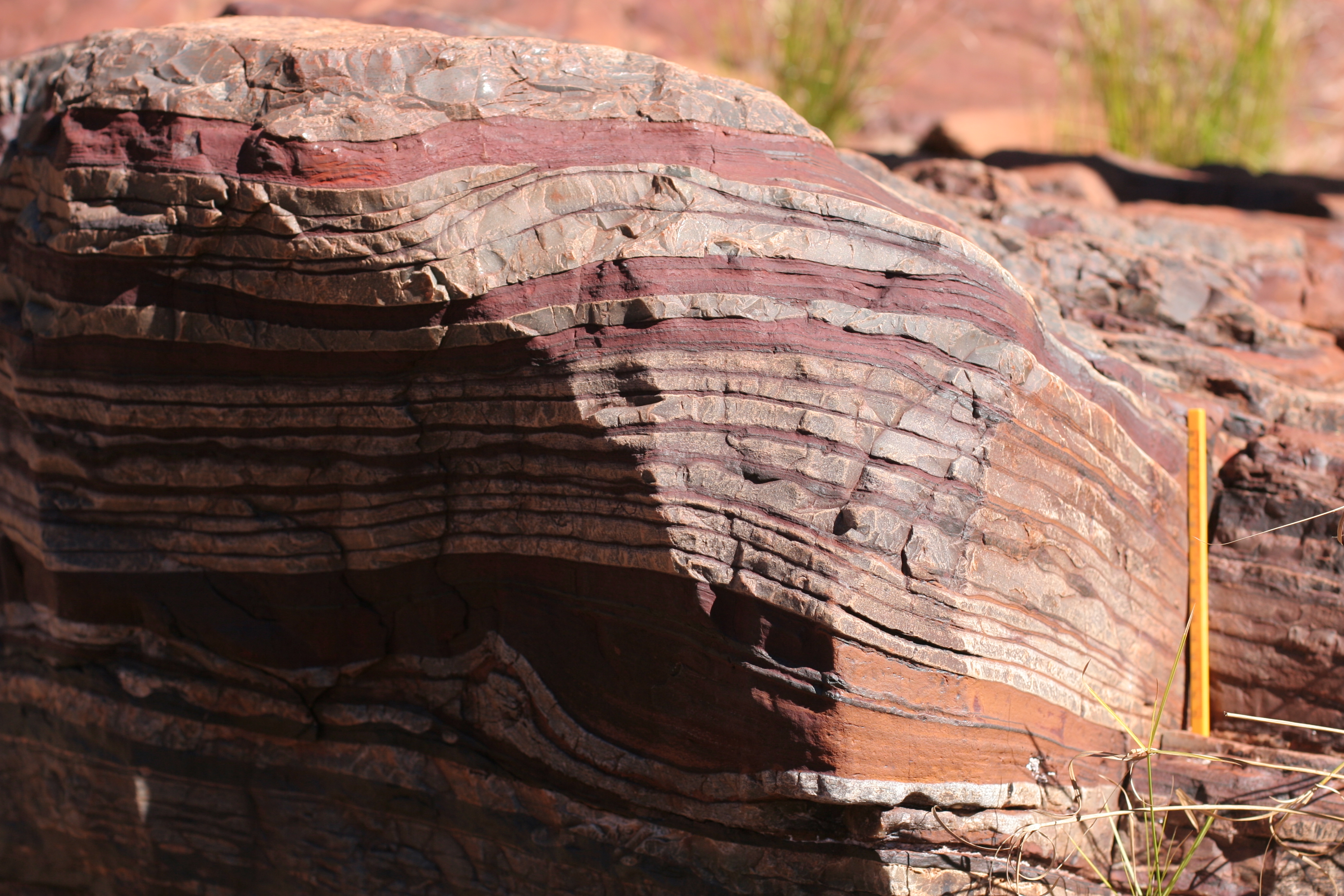 In the rocks, Ono and his colleagues focus on two specific processes that separate (fractionate) the isotopes. In the absence of oxygen, sulfur isotopes fractionate through photochemical processes independent of their masses. The quantum chemical and physical mechanisms behind this are not yet understood. Once oxygen is established as a permanent gas in the atmosphere, the sulfur isotopes fractionate in ways that are mass-dependent. But pinpointing when the shift in the type of fractionation occurs is difficult due to complexities in the geologic record, including missing slices of time.

"Oxygen might appear multiple times— it could come and go and come again," Ono says. Currently, Ono, Summons and their colleagues are working to confirm recent findings that the GOE occurred about 2.33 billion years ago.

Gareth Izon, a postdoctoral researcher who works with both Summons and Ono, investigates how the GOE spurred irreversible changes in Earth's biosphere. "Precluding time travel, I see two broad work-packages necessary to further our understanding of planetary oxygenation: data and experiments," Izon says.

'Today, the problem lies in the rocks we seek to read. On a tectonically active planet, rocks and their chemical records are constantly being destroyed or overprinted," Izon says. "Consequently, the availability of pristine geochemical records diminishes with age. If the devil is in the detail, you want to knowrThus, the availability of records has taken Ono, Izon, and Summons around the globe—in particular to Australia and southern Africa.

Once cyanobacteria evolved the ability to conduct oxygenic photosynthesis, which splits a water molecule and creates 02 as a byproduct, tiny whiffs of oxygen were produced—but were quickly "breathed" by bacteria or reacted with minerals and, so, could not accumulate.

"A molecule of oxygen is like a snowball in hell," Izon says with a laugh. The GOE signals that enough oxygen was produced to quench and overcome those fast-acting reactions so that oxygen levels could finally rise perceptibly within the atmosphere.

Fournier studies molecular phylogenetics to discern how different abilities within microbes evolved over time. "We only have two records of deep time on the planet and the changes that the Earth has seen, and one of them is the geological record. The other one is the record preserved within genes and genomes. And not only are these the only two records we have, but they're almost certainly the only two records we will ever have," Fournier says.

"What I'm interested in doing is using genomes as a completely independent record of the deep history of planet Earth, and comparing them to geochemical and within the rocks," Fournier says. "If we combine these, we can come up with a much better picture of how life and Earth have coevolved over their entire history.'

In his research, Fournier applies molecular clocks—models that time out different evolutionary events, such as the ability to split water molecules and produce oxygen, within microbes. These evolutionary events are fueled by mutations—changes in the specific genes of organisms.

"So as these mutations occur along a branch in the history of the group of living things, they accumulate," Fournier says. "The more time that's passed, the more changes that are expected to happen." To map these mutations in time, Fournier looks at the genomes of cyanobacteria alive today. Associate Professor Tanja Bosak also studies extant cyanobacteria, as well as their ancient counterparts. By identifying modern analogs of cyanobacterial fossils, along with their mechanisms of preservation, Bosak helps Fournier constrain the timing of events in cyanobacterial evolution.

"Cyanobacteria have evolved over billions of years, and their genomes encode the record of that evolution," Bosak says. "We can extract that information from the genome, sequence the genomes, compare them, and then really start to understand how different processes evolved in these organisms, and then hopefully time that information if we have some cyanobacterial fossils, and pin them down in time." 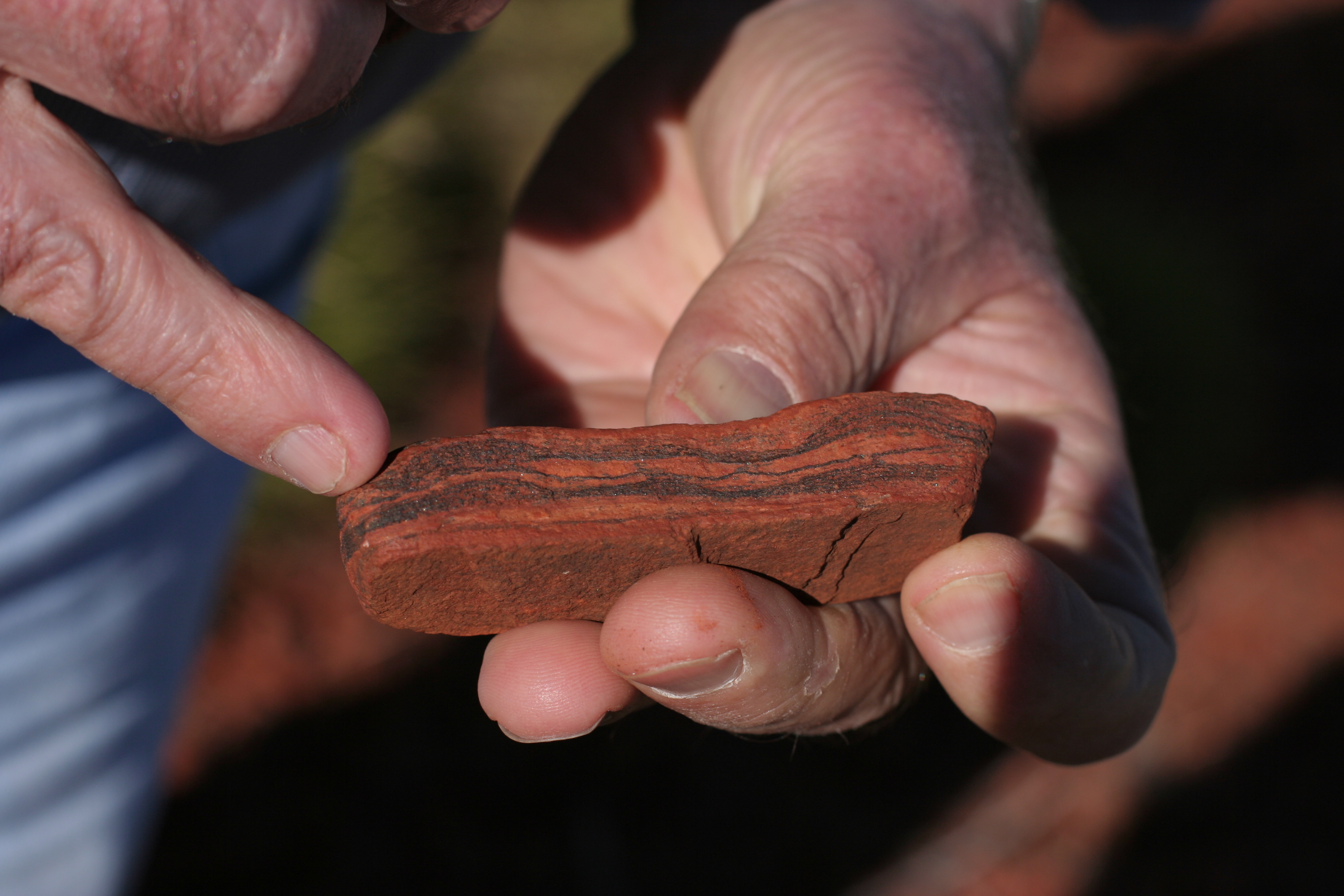 To do this, Bosak and her lab examine modern organisms and fossils under the microscope. "We choose the ones that really look most like some of the oldest fossils, we grind them up, we extract their genomes, sequence and analyze them, and then work with Greg Fournier, who is working the molecular clock model," says Bosak.

But cyanobacteria and their fossils comprise only a portion of Bosak's research into the GOE. "One of our major areas of interest are geochemical and mineral proxies used to infer oxygen before the Great Oxidation Event," Bosak says. She and her colleagues recently determined that manganese oxides, minerals previously thought to form in the presence of molecular oxygen, can form in anaerobic environments. "This challenges a lot of inferences of molecular oxygen before the Great Oxidation Event—the so-called whiffs of 02," says Bosak.

In addition, Bosak and her collaborators were able to describe the formation of dolomite—a mineral very common in microbialites before the establishment of oxygen—in photosynthetic communities before the GOE. "This work gives us a much better picture of what the world before the Great Oxidation Event would have been like," Bosak says.

"The vast majority of organisms that may have very important implications for the history of our planet are not only extinct, but may have left no direct record of their ever existing. And so while we have a huge amount of information—and we're very fortunate that the planet has preserved as much as it has—so much is forever lost to us that there are inherent limits to what we can understand." Fournier says. "But I hope that combining the genome and geological record will help transcend some of those limitations."

Summons says the collaboration between the EAPS researchers provides many avenues for synergy and cross-checking; "l think it's quite striking that a single Earth sciences department has five people working on what I think is one of the most captivating questions that you can raise in geobiology."