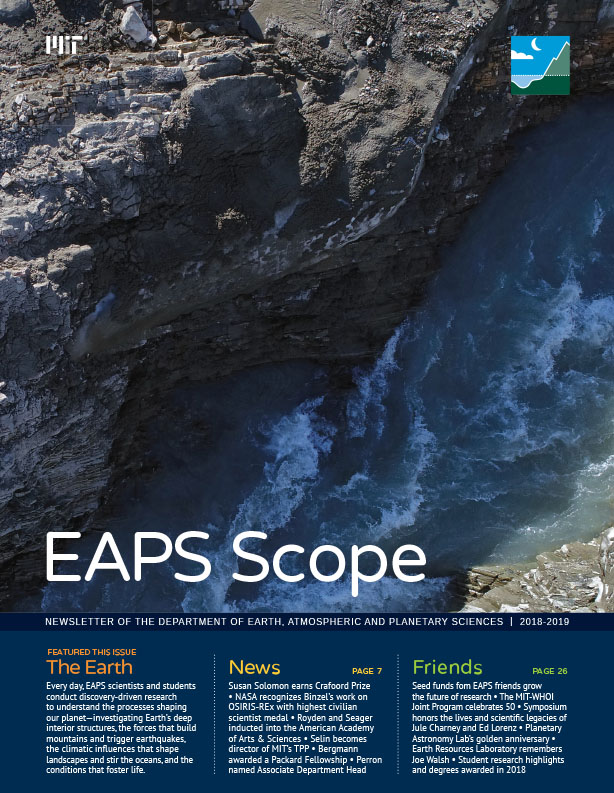 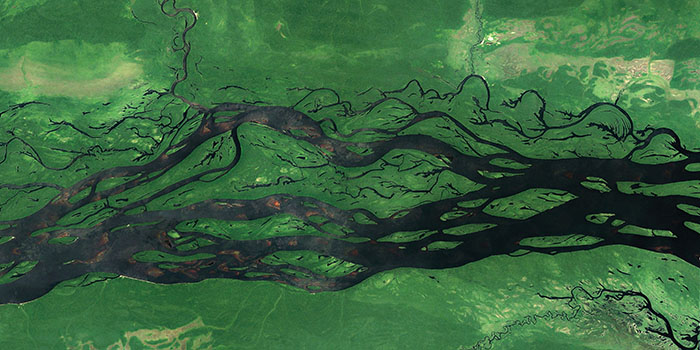 Rivers Run Through It

Rivers may seem like permanent features of a landscape, often used as natural boundaries, but recent work from researchers in MIT’s Department of Earth, Atmospheric and Planetary Sciences (EAPS) shows them to be dynamic, varying under different climatic conditions and even invading basin territory of neighbors.

River basin formation and a climate connection
There are more than one million river basins carved into the topography of the United States. They vary in shape, which, as MIT scientists report in the Proceedings of the Royal Society A, is heavily influenced by the climate in which they form. In general, river basins are shaped by rainfall, which erodes the land as it drains down into a river or stream, but the difference, they found, boils down to the local availability of groundwater—which, when it seeps back out, can shift its form further.

“This is the first time in which the shape of river networks has been related to climate,” says Daniel Rothman, professor of geophysics in EAPS and co-director of MIT’s Lorenz Center. “Work like this may help scientists infer the kind of climate that was present when river networks were initially incised.”

In previous research, Rothman and his colleagues identified a universal connection between groundwater and the way in which rivers branch: in regions where erosion is caused mainly by groundwater seepage, rivers branch at a common angle of 72 degrees. In drier regions however, rivers split at angles around 45 degrees.

“Previous work has helped explain the angles at which rivers join together to form these structures,” Yi says. “But each river is also intimately connected to a basin, so we suspected that the shapes of basins could contain some similar geometric curiosities.”

Accessing the shape and aridity of rivers and basins in the contiguous United States, they found an interesting trend: river basins in dry regions of the country take on a long and thin contour, regardless of their size. In more humid environments, river basins vary: larger basins, on the scale of hundreds of kilometers, are long and thin, while smaller basins, spanning a few kilometers, are noticeably short and squat.

They suspected that the dichotomy stemmed from their previous observations of branching rivers and reasoned that it may play a similar role in widening a river’s basin.

Looking generally at the geology and depth to which groundwater might penetrate, they found in drier climates any resulting reservoir or water table from rainwater would be too deep to come back up. In more humid environments, water often saturated the soil, creating large water tables close to the surface, and causing more groundwater to seep out around river basins than in drier climates. This suggests that groundwater plays a bigger role in carving out humid basins than in dry-climate river basins.

This effect may be especially pronounced at smaller scales over several kilometers. Meaning that, over a vast area, even in humid environments, the interaction between groundwater and the large-scale structure of river networks is relatively weak.

A growing water power
So what happens, then, when this relationship between climate, terrain, and the fractal geometry of river networks puts the basins of two of the world’s largest rivers on a collision course? At present, the Amazon River is slowly stealing a 40,000-square-kilometer drainage basin from the upper Orinoco River, according to new research in the American Geophysical Union’s Geophysical Research Letters—research which also suggests this may not be the first time the world’s largest river has expanded its territory by pirating from a neighbor.

The 2,140-kilometer long Rio Orinoco–fourth largest river in the world—rises on the western slopes of the Sierra Parima, a mountain range on Venezuela’s southeastern border with Brazil dividing the watersheds of the Amazon and the Orinoco. It drains 880,000 square kilometers of Venezuela and Columbia. The Rio Casiquiare breaks away from the Rio Orinoco in the remote lowlands below the mountains, diverting about a quarter of the Orinoco’s flow south to the Rio Negro, a major tributary of the Amazon, which drains 6.9 million square kilometers.

The Casiquiare link between the Orinoco and the Amazon is the only such distributary connection between two major river basins in the world—and the ability to observe its behavior in real time could help researchers understand how river systems evolve and how the Amazon Basin grew to dominate the South American continent.

“The Orinoco and the Amazon are two of the largest rivers in the world, and the fact that there is this perennial water connection between them has puzzled people for a very long time,” says Maya Stokes, an EAPS graduate student and lead author of the study. “A river capture in action is a rare and unique chance to observe this process that we have evidence for in the geologic record but don’t frequently get to actually observe.”

Stokes and her EAPS colleagues, graduate student Samuel Goldberg and Associate Professor of Geology Taylor Perron, are interested in how river systems become continent-spanning behemoths like the Amazon.

Connections between river basins are typically ephemeral ones during seasonal flooding. Stable connections are rarely observed because one watercourse usually captures all the water for itself, Stokes says, sometimes within days. But this connection between the Orinoco and Amazon rivers has existed for centuries. The authors believe that, through seasonal flooding and erosion, the Casiquiare eventually became a perennial channel.

To understand how the Amazon is seizing water, Stokes and her colleagues analyzed measurements of water velocity and channel dimensions and found that the Casiquiare is eroding faster than the Orinoco, deepening its channel, while the Orinoco’s flow is slowing due to build-up of sediments in its streambed. The terrain on the Casiquiare side of the divide, which leads to the Amazon, is more than twice as steep as the flat valley the Orinoco runs through below the split.

Because of the steeper course and greater capacity for moving sediment, the new study concluded that eventually the Casiquiare will capture the flow of the Rio Orinoco upstream of the split for the Amazon Basin. When the diversion is complete, the Amazon will have stolen an area about twice as big as Lake Ontario, diminishing the river’s volume significantly.

The process of river capture may be slower in lowlands, like the region where the Casiquiare splits from the Orinoco, because the low grade allows sediments to settle and counter losses to erosion, the study suggests.

“Having bifurcations that are stable like this really requires sediment deposition,” Stokes says, and the bigger a river grows, the more power it has to wrest further diversions of water from neighbors, “It’s a pretty major implication for the Rio Orinoco.”

This research was supported in part by the US Department of Energy Office of Science, Office of Basic Energy Sciences, Chemical Sciences, Geosciences and Biosciences Division.

Story Image: The braided landscape of the shallow, laconic Rio Negro—the largest blackwater river in the world—accounts for moving 14% of the water in the humid, rainy Amazon basin. Photo credit: Google Earth