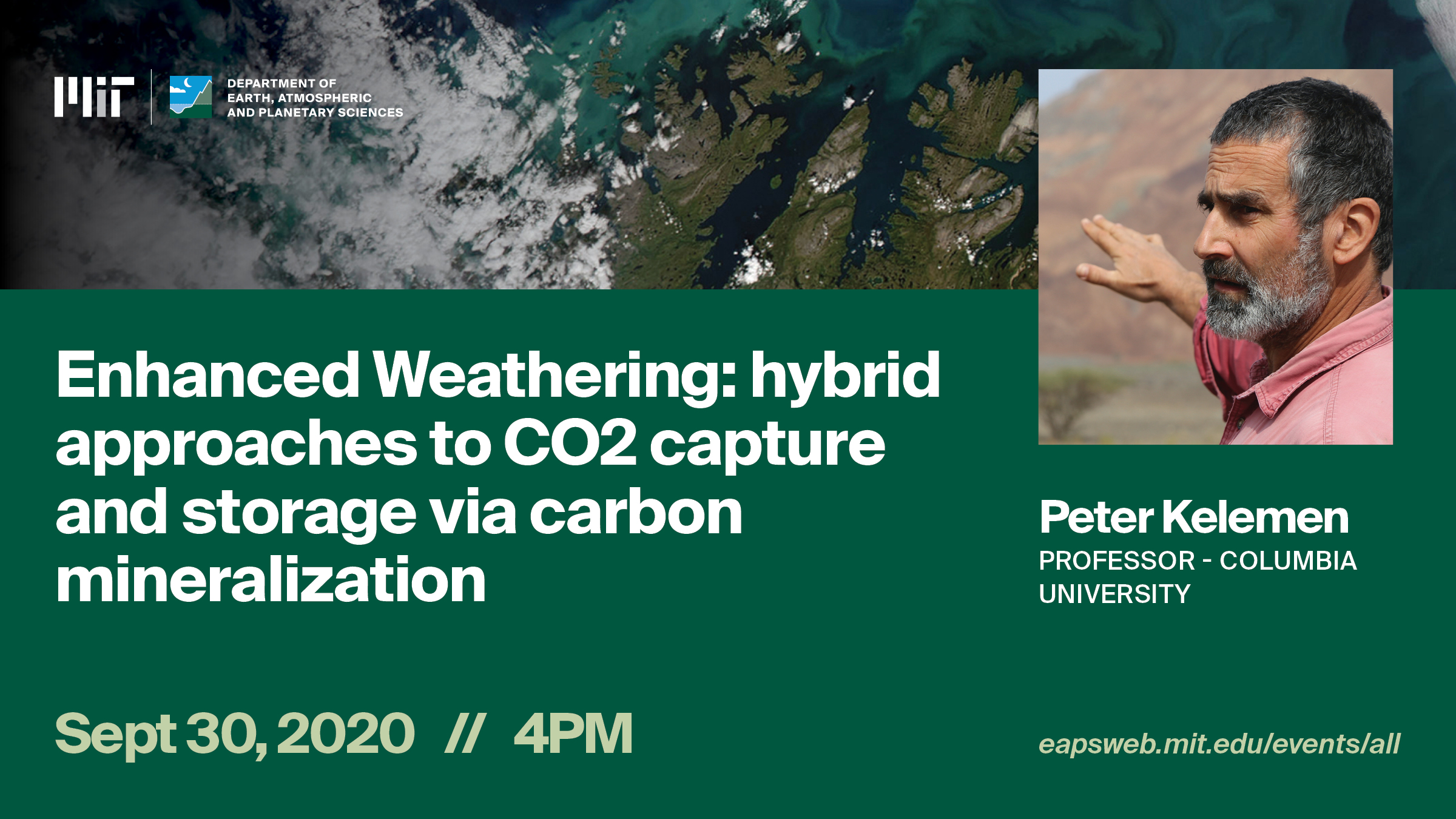 Since I last talked at EAPS about CO2 capture and storage via carbon mineralization, I’ve reduced my focus on storage and concentrated on developing low cost methods for CO2 removal from air (CDR). I learned the context provided by other CDR methods while serving on a National Academies committee reviewing "CO2 Removal from Air and Permanent Storage", resulting in a 2019 "Report on Negative Emissions Technologies". In turn, I realized that various processes, sometimes termed “enhanced weathering” as well as carbon mineralization, might offer comparatively low cost routes to CDR at the scale of gigatons per year. I will describe two of these, one involving MgO- or CaO-looping, and another iusing highly engineered Direct Air Capture machines to enrich air to a few weight percent CO2, and then using that to enhance CO2 concentration in water circulating through reactive rocks in the subsurface. The first of these involves quarrying magnesite or limestone, calcining it (cooking it at 600°C or more) to produce CO2 for storage or use, plus MgO or CaO. In turn, the oxides are placed in thin layers for weathering over about a year, where they will draw down atmospheric CO2 to form carbonate minerals. The newly formed carbonates are calcined again, and so on. This is certainly not rocket science, but it currently has the lowest peer-reviewed cost estimate for any CDR method analyzed to date, and there is a lot of room for optimization. The second method is motivated by the fact that it is much less costly to enrich air to 3% CO2 than 95%. Water sparged with 3% CO2 gas transports more carbon - compared to surface water saturated in air - while circulating through reactive rock formations in the subsurface, reducing the cost of drilling and increasing the amount of CO2 mineralized and stored per borehole per year. As for the looping methods, these hybrid approaches are new and offer substantial opportunities for optimization.

Peter Kelemen is Arthur D. Storke Professor in Columbia University’s Dept. of Earth & Environmental Sciences, with labs and offices at Lamont Doherty Earth Observatory. He was Associate Chair and Chair of the Department from 2012 to 2018. Kelemen is a member of the US Academy of Sciences, a Fellow of the American Geophysical Union (AGU), the Mineralogical Society of America, and the Geochemical Society, a recipient of the AGU Bowen Award, an adjunct Scientist at the Woods Hole Oceanographic Institution (WHOI), a Research Associate at the American Museum of Natural History, the Chief Scientist of the ICDP Oman Drilling Project, and a member of the NASA Mars 2020 Rover Science Team. He worked as a mineral exploration consultant from 1981-1990, received his PhD from the University of Washington in 1987, and spent 16 years as a research scientist at WHOI before moving to Columbia University in 2004. His research focuses on chemical and physical feedbacks during reactive porous flow of fluids and associated deformation. For the past dozen years, this has included a focus on natural and engineered systems for CO2 removal from air and permanent, geological storage, via carbon mineralization during weathering and alteration of Mg- and Ca-rich rocks.